Anna Arnold may be most recognized right now as the guiding light of Wasmer Gallery at Ursuline College, where she took over from long-time Director Frank Frate about two years ago. Arnold’s Facebook page recently featured a sixteen second video of all the works on view in the most recent exhibit she put together, “The Drawing Show: From Doodles to Digital.” It’s like that classic single-take movie about the Hermitage, “The Russian Ark,” only much faster. The show itself  [The Drawing Show at the Florence O’Donnell Wasmer Gallery, through Dec. 18, 2015] includes about 70 works by artists working in northern Ohio.  It’s successful both as an interestingly inclusive survey exhibit (several notable cartoonists and illustrators join the crowd of “fine” artists here) and a reunion for veterans of the local scene, accenting a few newcomers who have caught Arnold’s eye. 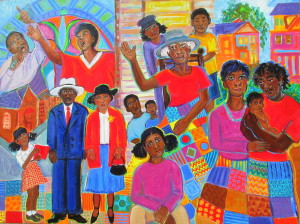 But Arnold herself (modestly not included in the show) is the consummate veteran. Cleveland-based art collectors and fans have been aware of the brash (yet retiring) multi-media diva of street-Pop (the post grad variety: she has a BFA from CIA, and an MA in arts education from Case Western Reserve University)  for more than three decades. She’s a consistently exciting artist, the creator of an immense, real-time flow of self-portraits and other expressive, intensely colorful paintings, shown in over 200 solo and group exhibitions (so far). Her vivid portraits of contemporary faces, papier mache painted sculptures, and artworks in various media large and small are included in the Progressive Insurance Collection and perch on the walls of public institutions or the sides of buildings throughout the city. They’ve also tended to be affordable and are among the private holdings of many, many people not only all over town but all over the world. As the poet and critic Charles Baudelaire advised the painters of his own day in his book The Painter of Modern Life: “Show us our own poetry.” 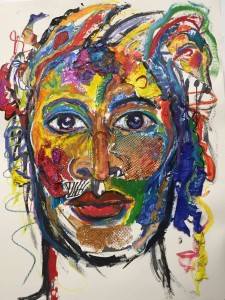 Arnold does that.  She often chooses the famous to render in her layered expressionist techniques, and the infamous, too. But in terms of sheer numbers, the majority of her subjects are the not-so-well-known, regular people depicted with eyes that look out from complex, constructed surfaces with an intense, steady gaze. Crazy, wonderful colors pile up along with a range of confrontational textures, all held together by hand-made, festively decorated, bumpy frames, edged in gold paint. There’s a celebratory feeling to Arnold’s work, but there’s more than that. Her people aren’t just smiley faces – very far from it. These are strongly modeled and conceived, emotionally nuanced studies of believable personalities, images that convince the viewer that pictorial and personal truth is trapped in their gaudy frames. Whether anxious or perfectly happy in their predicament, they present a brief for psychological authenticity, from anger and isolation to barely contained excitement about living.  Their singularity boils over into the space around them. You can’t soon forget, and you can’t easily ignore an Anna Arnold portrait.

I became personally acquainted with Anna when we exhibited together at SPACES back in 1988, when the young organization was located in a storefront in the Bradley building on West 6th Street. I was fast approaching forty years old at the time, but Anna–who was not yet thirty–was more age-appropriate for the display of neo-expressionist-type, 1980s figurative art. (The third exhibitor in our three person show was the very cool Brian Azzarello, who was painting on unstretched canvas at that time.  In more recent years he’s become one of DC Comics best known and loved writers, in charge of the current Wonder Woman series. He moved to Chicago not very long after the SPACES exhibit.) 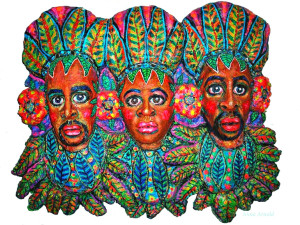 Anna Arnold’s studio is located up a flight of steep, darkly varnished stairs, in one of the rooms at the eastern end of Josaphat Arts Hall on East 33rd Street. The former Roman Catholic church with its tall bell tower just off of Superior Avenue, purchased and repurposed by Alenka Banco (now Executive Director of the Cleveland Arts Prize), has been home to a number of artist’s workspaces, public exhibits and enterprises over the past decade—including Arnold’s studio, her place to make new art and stash some of her older work. After a longish period of not going down there to fiddle around with paint because of the grown-up job at Ursuline, she walked in and said to herself, “What’s going on? Is this a museum?” Then she got busy.

The studio itself isn’t a large room, but it’s full of her energy and work. Two tall windows provide strong morning light from the far end, and Anna’s painted, sculpted people take over every remaining vertical space.  Still more sit on easels and lean along the baseboards. There’s an old TV in one corner, sitting on an end table. I didn’t ask if it works or if she watches it, but I bet the answers are yes and yes again. I know painters who listen to books on tape or to music while they work, and who have a TV somewhere near at hand, just as they have a microwave oven stashed next to a can of turpentine or spray fixative. Arnold’s subject matter and career are something of a case study in the ways that pop culture, mass media, and the fine arts intersect, overlap, and sometimes explode. A fine portrait of Toni Morrison rests on an easel standing in between the studio windows. It dates from 2000, when Arnold was chosen to show 90 of her paintings in a solo exhibit at the second biennial Toni Morrison Society Conference, held that year in Lorain, the author’s home town. Above Morrison, a slightly smaller-than-life painted papier mache bust or mask of the great Spanish painter Velasquez brings in another motif with high culture resonances. But just outside the door, a little above eye level, is a large, angry head, an anonymous punk rock sort of demon, dashed off con brio in yellow and red paint, against a blue background. It appears to be shouting, daring any overly genteel ghost to float past the first landing.

Long before her 1983 graduation from the Cleveland Institute of Art, Arnold embraced the great modern cult of celebrity.  At first her work laid claim to a continuity with Pop art, especially Andy Warhol’s take on mass media imagery and myth-making. She painted pictures of Warhol himself, and many other artists she’s admired, recent and classic. Every rock and roll deity you can think of  has had some face time with Arnold’s brush (though she once spread paint very effectively with a credit card during an educational demo). All of them are conceived as literal icons – secular saints, boxed into frames that are really shrines, symbolic of their unique crossover status in an age when charismatic power is more likely to fill a concert hall than a church. On the other hand, Anna has done great paintings of religious subjects, too. Several Madonna and Child paintings hang in the studio, one of which is based on a Renaissance work, though others depict contemporary people, transfigured by art. Religion, glitz, fame, artists – these separate streams of expression join in Arnold’s paintings, in a long struggle to reclaim powers and dimensions of self in the modern world.

Anna told me that when she was little, growing up on Cleveland’s east side, she was able to see a tower downtown in the distance. “I drew a big green crayon circle on my bedroom wall when I was five. My parents, they didn’t go crazy. I believe I was born to be an artist — I never had that struggle. My uncle kept some hobby paints in a Dutch Masters cigar box, I took them and I went to an upstairs porch and disappeared, painting for hours. And I looked out over the city and saw that tower.”

Her studio at Josaphat Arts Hall may be something like that bedroom. Some artists’ studios are like showrooms, and others do have a museum-ish flavor, but Arnold’s is a private place, for working and thinking. A figure painted on torn and glued-together fragments of fine art paper occupies part of one wall. It’s called “The Yearning” and was made soon after her father’s death, a couple of years before she moved in here. Like most of her images, this one doesn’t seem tragic or unhappy. If anything, it projects an angelic calm. The fact that it’s not restrained by a frame, but instead is pinned on the wall like a big paper doll, says something about freedom and about attitude. Anna Arnold has long since painted her way into the city, and as an educator has shared her techniques with many students of all ages. I’d say that her work and her life teach this: It’s always possible to find a way to work and a place to be, to stand or sit in an old school or out on the sidewalk with a piece of chalk (Anna’s tried everything), and make something new–a big green mark that claims the world as our own. It’s always possible to be free.