Jill. Her “Beautifully Human” tour graciously made its rounds to C-town in Spring, leaving neo-soul heads and hip-hoppers lucky enough to see & hear her perform, mesmerized. Her Cleveland connection was brief but breathtaking! An unusually warm March evening outside-gave way to a buxom stage backdrop inside called Scott. The songstress silhouetted behind the velvet Playhouse curtain, was patiently waiting to bless the stage with her beauty not to mention, bomb-ass vocals! The indoor venue enhanced the natural acoustics emitting from windpipes that would not soon be forgotten.

Opening for Ms. Jill, was a label-mate. A faceless, nameless warm-up act designed to settle the roaring crowd, and create a diversion for the early birds. A sultry saxophonist followed– blowing instrumental ballads of Scott’s past playlists. The familiar tunes turned the awaiting larvae in our souls into butterflies in our bellies! SHE’S coming.

With the energy of the sax man’s odes-du-Jill still lingering. SHE stole the stage. SHE commanded her followers to their feet, and we humbly obliged. SHE could’ve commanded the sun to re-shine after retiring for the evening-and it would have done so with haste! Just her smile, her larger-than-life presence could’ve made mountains feel minuscule. “You’re here. I’m pleased. I really dig your company-y … ” and we yours, Jill. We couldn’t wait to take the Long Walk tonight.

3 songs in, Ms. Scott encouraged the entranced crowd to come closer to the stage. Despite being a mere 7 rows back, I still fought my way to the 6th, then 5th trying to come ever closer to the enigma that is SHE. We forfeited comfy seats in 7, to stand in stilettos in row 2 the rest of the show. The painful trade was well worth it.

The most palatable part of her show sprung from the song “Do You Remember?” She talked to the crowd as if she was having a “sistah-girl,” down-home talk about love and pride and just “keepin’ it real”! Her monologue reminding black men to “remember” her & other black women– to say “hello” when they see a black woman vs. turning up their noses at us. The primarily black female crowd erupted in enthusiastic applause, cheers, and “You go, girls!” Jill was speaking for us, and did it with style, poise and conviction.

Rounding out the show was “Gettin’ in the Way”, “It’s Love” and “The Way”. When Jill finally left the stage, the audience made it clear that they felt slighted-screaming out “He loves me!” … “He loves me!” Pause. “He loves me!” Silence. It seemed like forever, but Mama didn’t disappoint– returning to quench the thirsty crowd’s cries with a low, melodic hum echoing from behind the curtain. The roaring crowd grew instantly mute. Then … the ultimate serenade. “He loves meeee especialll-lly different… ever-y … time … ” SHE emerged. Again. This time, more beautiful and glowing than the first. Shrieks and screams drowned out the very tune we’d been waiting all concert to hear! “He Loves Me” lasted long .. but could’ve spanned a lifetime for all we cared-a fitting song to end not only a romantic evening, but a soulful showing from a singer who just oozes “black love.”

She sincerely & graciously thanked all of her us for “feeling” her & showing so much love. It was well earned. What’s most impressive about the melody was her “down to earth” demeanor-despite being obviously BEAT from throat to feet! As she stood stage-front, sweaty, bottled water bobbing from a bent finger, grinning like a Cheshire cat on Quaaludes tears welled up in her eyes. The pure emotion flooding those beautiful brown windows, showed her soul. And it was real. It was real. We cried right along with her.

Jill Scott is a force to be reckoned with now, and for many decades to come. She’s bringing back the lost art of love, being IN love, GIVING love & just ENJOYING life in its simplest forms. Her music spoke to us. No it roared, hummed, and howled like a beautiful banshee! Keep doing what you do, girl. We’re listening.

The Quantum Leadership Masterminds have a private event in the atrium at the Cleveland museum of art. Jeff Hoffman invited Georgio Sabino.

Mr. Sabino shows his work of art to the Quantum Leadership Masterminds group. In this group they had a drum circle in addition to a wonderful guitarist. There were young millennial’s entrepreneurs from all over the country and one from Vancouver British Columbia.

Jeff Hoffman spoke about entrepreneurship and his travels and is learning experiences from other entrepreneurial’s all over the globe.

The Cleveland museum of art has a policy if artwork is brought into the building they have to process it for it to leave out.

Sharon was the contact at the. Museum of Art shared that there were many admirers of the work.

Mr. Sabino had to go through security and the employee entrance while being escorted with his work of art in order to leave the building. 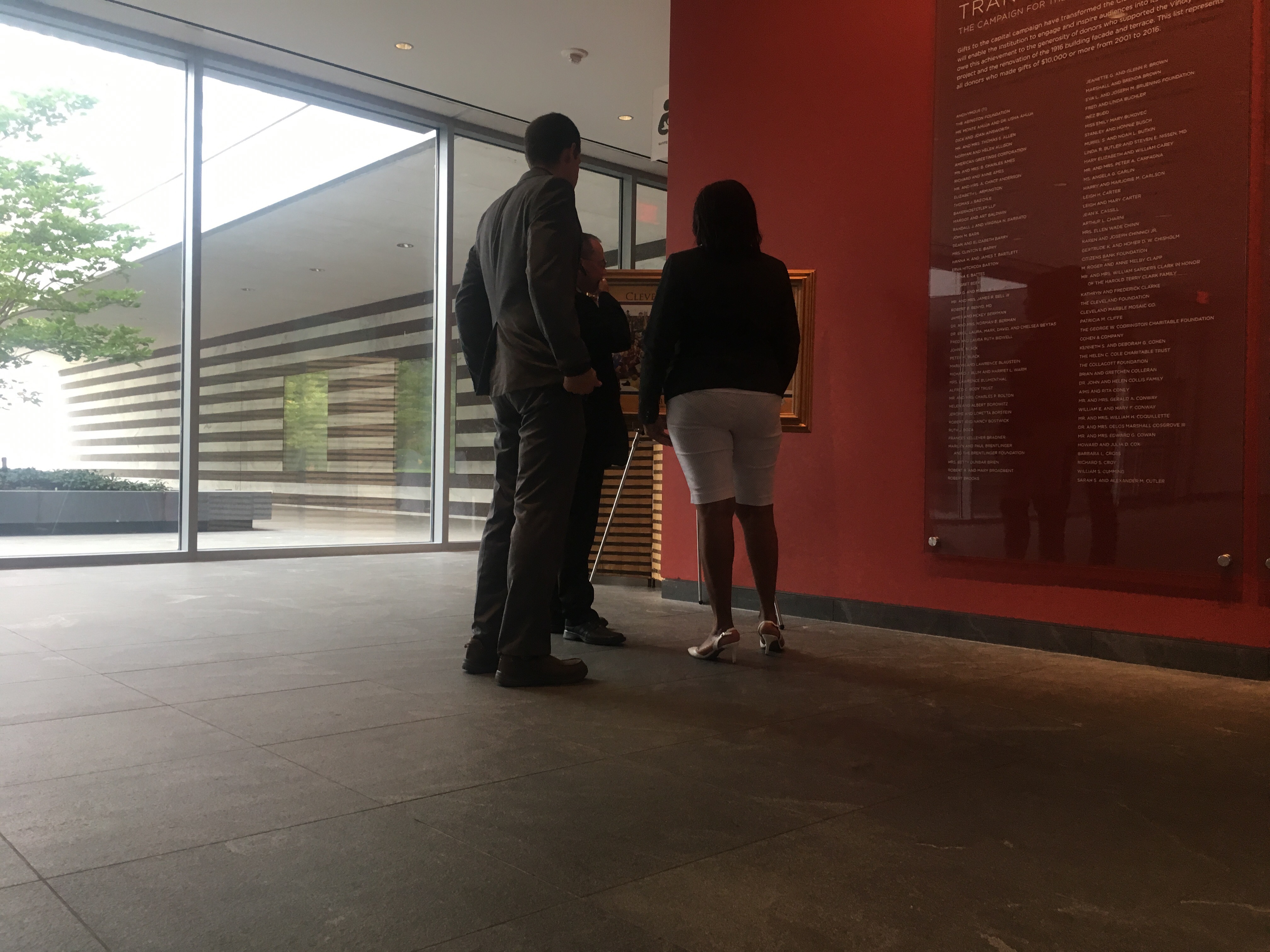 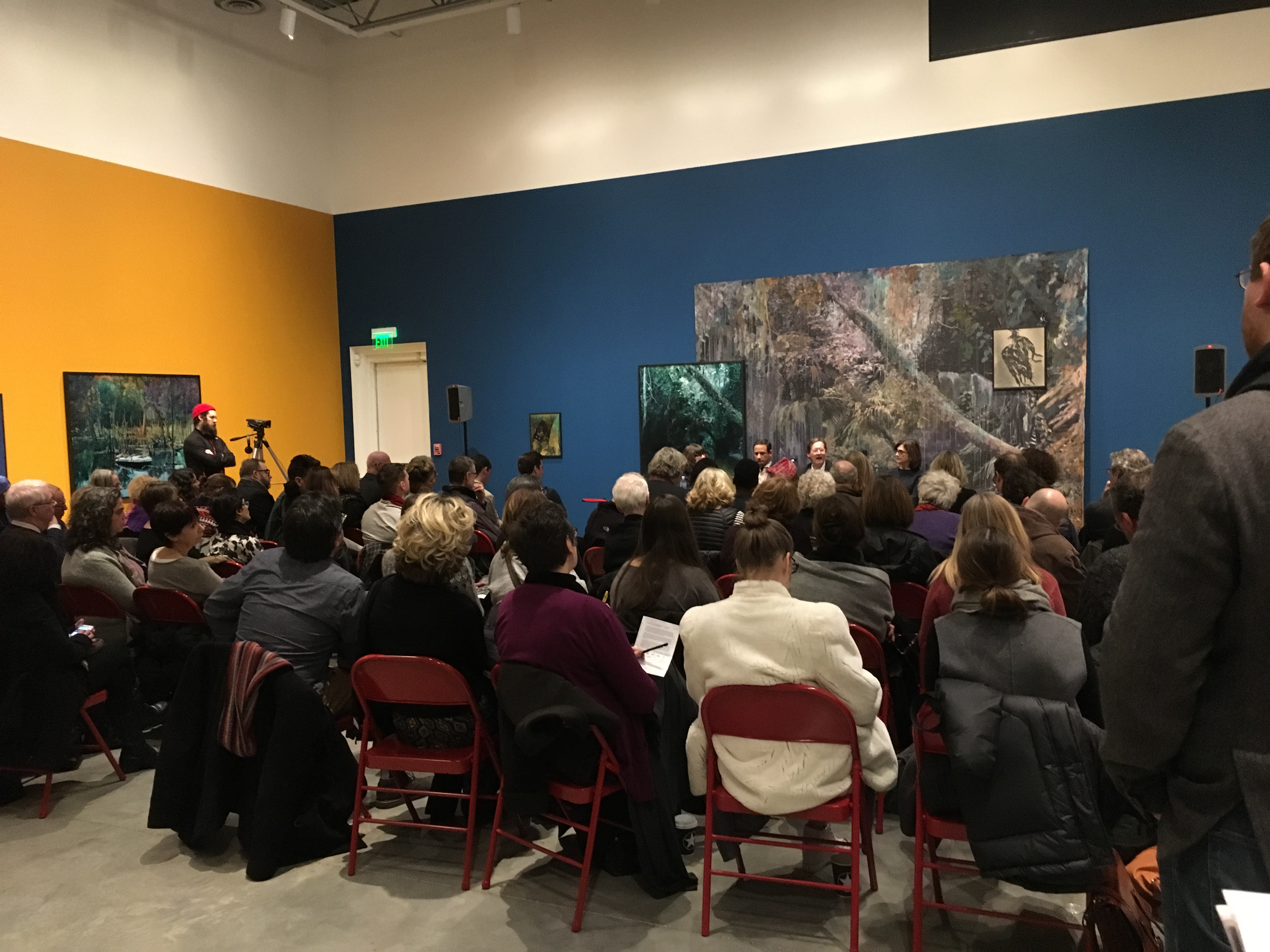 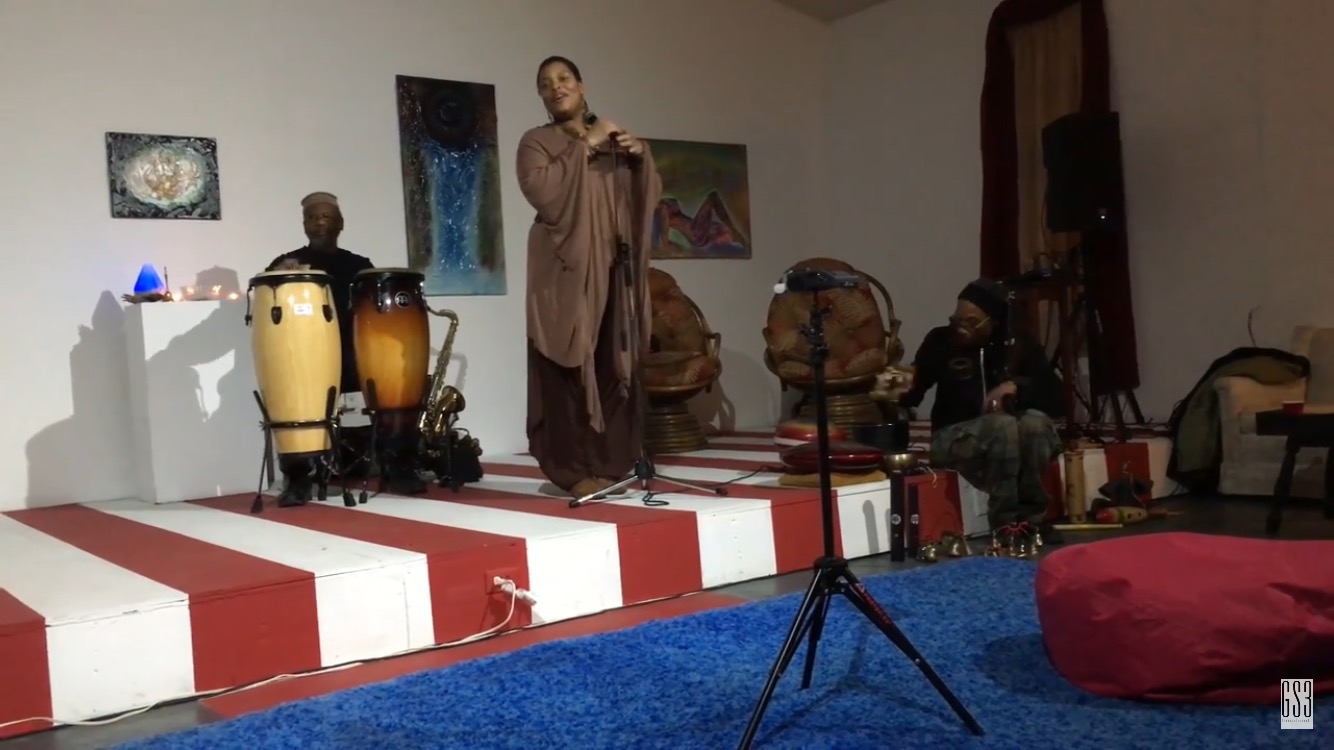 RE: Artists at 1900 Exhibit Bucks The Trend Of Economic Hard Times

CLEVELAND – While many Americans may look to the future with dubious uncertainty about their financial future, for area artists the issues of enough resources for housing, food and other basics are an ongoing way of life that are no different now than before the latest economic crisis.

In spite of these tough times, resident artist Georgio Sabino III and 15 of a collaborative group, The Artists at 1900, will have their works on exhibit at the Wooltex Gallery of the Tower Press Building at 1900 Superior Avenue in Cleveland during the weekend of May 16-17, from 9 a.m. to 7 p.m. on Saturday and Sunday from 1 to 6 p.m.

“It’s kind of interesting what’s happening [with the economy],” notes artist and entrepreneur Georgio Sabino III. “We [artists] didn’t really lose a lot, because we didn’t have anything to begin with… all we have is our art…”

Sabino will have more than his art during that weekend. He will have completed his master’s degree in art education from Case Western Reserve University and participate in the commencement activities with his niece, Paige Smith, who also will graduate with her bachelor’s degree in nutrition.

According to a December 2008 report by the regional Community Partnership for Arts and Culture, “From Rust Belt to Artist Belt: Challenges and Opportunities in Rust Belt Cities”, despite a struggling regional economy, artists have much to offer towards revitalization efforts. The assets that artists can offer include: migration to, and reconsideration of, inner cities; economic impact; a boost to property values; sweat equity; engaged citizenry; civic vitality; and, youth development and educational enrichment.

The latter is of special interest to Sabino, who hails from a large family and a bevy of youthful friends and relatives. Sabino particularly sees and feels the need to nurture young people to persevere towards a better future by getting a good education. In this regard, the CPAC report emphasizes “The need for an educated and creative workforce has never been greater than in the current economic era.”

Sabino’s first hand realization of this need to become a role model and to encourage youths stems from his own personal history as an African-American male of mixed ethnic (Creole) heritage and many learning challenges. In describing his birthright, he stated, “My momma was French Indonesian and Spanish, and my daddy African-American and Native American. But most everyone who looks at me sees just another Black man in America trying to make it…”

Having grown up in a range of living situations from the upper-middle class lifestyle of affluent suburbs, as well as being in middle class rural ‘small town USA’ and poorer urban neighborhoods, Sabino’s sense of the disparities in America between issues of race, class, access and privilege have been acutely observed. He credits his seventh grade art teacher with opening his mind to the possibilities that art could afford in expanding his world.

After graduating from the Kent State University Fine Art program in 1999, Sabino partnered with a friend to operate and sell their respective fashion lines at their own Soho boutique Soul Fire. He also had a fashion show at the Puck Building in New York City and other venues. Since then, Sabino’s other life experiences have encompassed work in corporate, celebrity and fashion photography; sales and marketing; community art education, voluntarism and mentoring; and substitute teaching in the Cleveland Heights-University Heights School District.

During his graduate studies at Case, Sabino compared his own learning process with that of students now impacted by the No Child Left Behind Act, from which the primary thematic influence of his master’s art thesis developed. Sabino’s exhibit will include this triptych symbolizing the experience of being a Black student in the American educational system. Sabino’s paintings reflect a lifetime of perseverance and the subsequent achievement of his educational goals to date.

One of Sabino’s mentors and contemporary artist Bruce Conforti observes, “The city of Cleveland should be looking forward to seeing the works of an emerging talented artist like Georgio. I believe in the saying, ‘The cream always rises to the top.’ Artists have to get out there and get seen, and people have to do their due diligence. In that regard, it doesn’t matter what the economy is. Good art sells and besides, it’s [art is] a good investment.”